G+: This makes me very cross

This makes me very cross. The regulator's better come done hard on these guys. It annoys the heck out of me when any pharmacy starts selling alternate medicine - basically it legitimises them to people who expect a pharmacy to be full of actual medically proven products.

'Vaccine pills' to be withdrawn 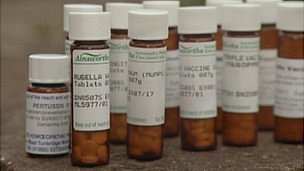 (+1's) 2
I definitely believe that some natural remedies have their place - we depend too much on chemicals, sometimes. However, medications that have been rigorously tested and proven are also important. They should be labeled as such.
I see nothing wrong with natural remedies myself - I just wish they'd show their effectiveness in a clinical clinical study (more so than a placebo), before claiming they solved everything from nausea to through to malaria. And there are a number we know are quite safe and effective, for example, Salicylic acid from Willow bark is basically where we get Aspirin from, and that cup of tea I just drank is anything but ineffective first thing in the morning. :)

The thing that gets my goat is either a) products that are nothing more than sugar pills (and have been proven to be no more effective than a placebo) or b) products that make wildly outrageous claims for serious diseases with no evidence at all. Homeopathic medicine does both, which is why I get so cross.
If only we could live in a chemical free world!!  I for one am a huge proponent of a nuclear only age.

Now chiropractic, that sounds like a good way to get my prescribed dose of bullshit :)
I do my very best to avoid chemicals in general, and I certainly wouldn't be putting any in my body that didn't pass the rigorous standards of the Queen and Prince Charles.

I think these pills aren't homoeopathic enough; with diabetes so widespread, sugar could pose as much as a danger to young children as aspirin, caffeine or chiropractors. I would think the placebo effect could also apply to bottles filled with invisible, intangible pills so the only thing I would allow my imaginary children to ingest would be empty pill bottles.